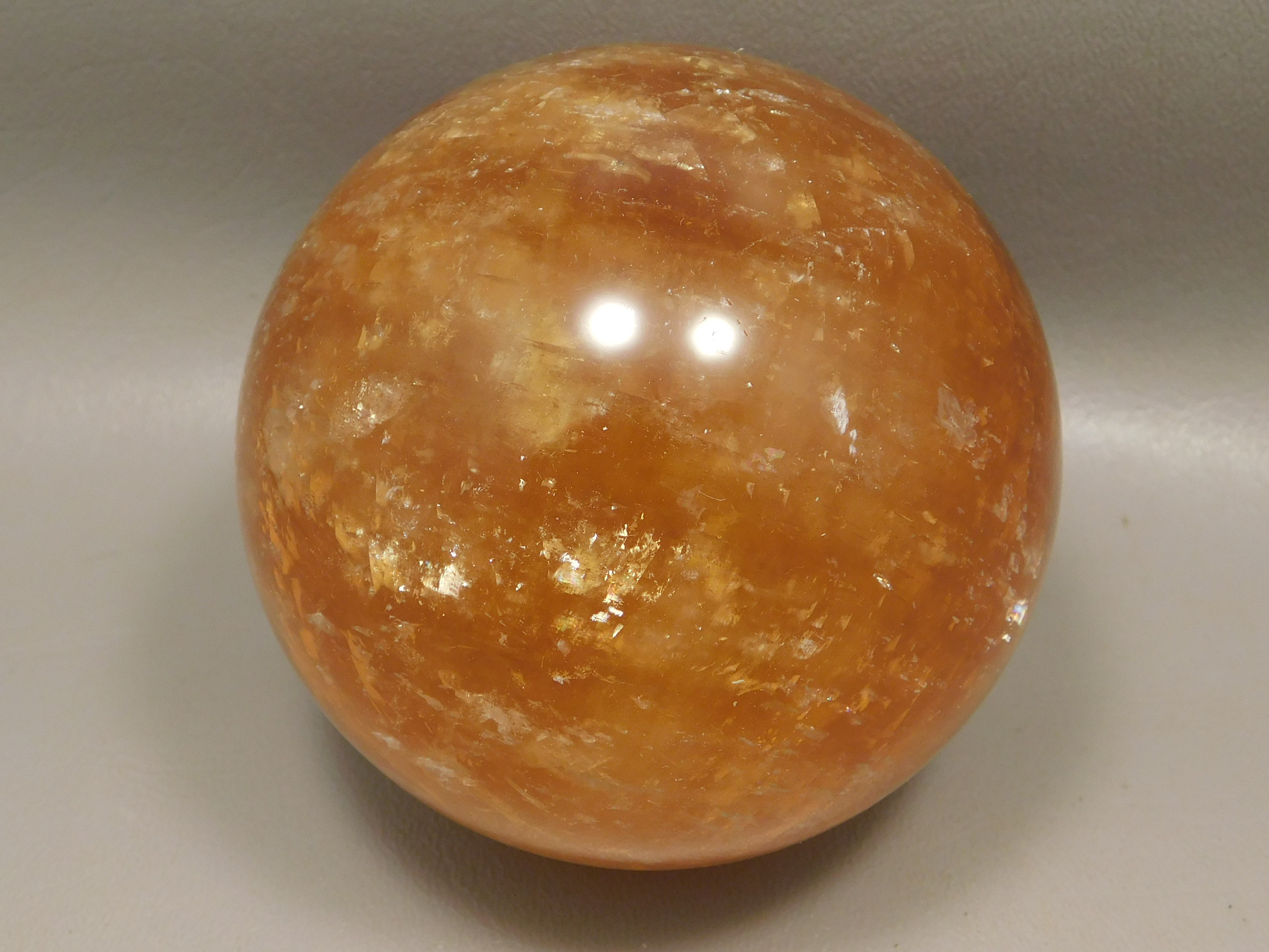 After Quartz, Calcite is the most next common mineral on the face of the Earth, comprising about 4% by weight of the Earth's crust.

It is found throughout the world in sedimentary, metamorphic and igneous rocks. Calcite is a carbonate mineral and is found in both massive or crystals. More than 300 different crystal forms have been found in Calcite.

Calcite has a perfect cleavage, meaning it breaks perfectly along one of its plains.  Calcite will dissolve in vinegar or acid.

Calcite gets its name from "chalix" the Greek word for lime. It generally has a hardness of 3.

Calcite comes in many colors, including colorless, white, pink, yellow, blue, brown or orange and can sometimes be multi-colored. Even the massive formations can sometimes be translucent.  Though found on every continent, the most abundant source for many of the colorful varieties, such as Blue Calcite, and Orange Calcite, is Mexico.  The beautiful Honey Calcite pictured above is from China.

Calcite is the primary mineral in marble, Mexican onyx and limestone.

It also occurs in caverns as stalactites and stalagmites. Calcite is present in the seas and most streams, and animals and people need it to make their shells and bones. When the hot spring waters rise to the surface and deposits the calcite in mass layers it is known as Travertine or Onyx. When impurities are present, such as iron, the travertine can have a banded effect. Calcite can form rocks of considerable size, in fact a crystal was found in Iceland that was over 20 feet long and weighed about 250 tons!

Calcite is a cleansing, refreshing, and revitalizing influence.  It is said to be excellent at removing blockages, renewing energy, and enabling one to see joy in life.

Aragonite is a common mineral found worldwide.  It is a carbonate mineral.   Aragonite is a polymorph of calcite, which means that it has the same chemistry as Calcite, but it has a different structure, and more importantly, different symmetry and crystal shapes.  If heated under intense heat (725 degrees) it will change to Calcite.

Aragonite was named from where it was first identified, in Aragon, Spain.  Though harder than Calcite, Aragonite is still a soft mineral, with a hardness of 3.5 to 4.  Aragonite can be found in several forms, in crystals, or in fibrous masses, coral like structures, or banded stalactites.  It can be found in a variety of colors, including white or colorless.  Like Calcite, it forms in caves and around hot springs and it will dissolve in acid.  Aragonite fluoresces bright pink under UV light.

Metaphysical Properties of Aragonite: Aragonite is said to boost self-confidence and feelings of self-worth. It also diminishes anger and relieves stress. Aragonite is professed by mystical lore to be beneficial for chronic fatigue, hair loss.

Dolomite is a sedimentary carbonate rock and it too is found all over the world. Dolomite is both a mineral and a rock. The mineral is the pure form, and Dolomite rock is composed mostly of Dolomite, but also with impurities such as Calcite, Quartz, and Feldspar. It is named for the French mineralogist, Deodat de Dolomieu.

Though harder than Calcite, Dolomite also is a fairly soft stone-about a 3.5 to a 4.  Its color usually ranges from white to yellow, with browns and pinks.

A very beautiful variety of Dolomite that we carry a lot of is known as Wave Dolomite or Rolling Hills Dolomite.  We also have called it Desert Sandstorm, but that seemed to confuse people that it was a "sandstone".  This beautiful variety is found in Mexico and has a great layered pattern of reds and browns.  The layers resemble the waves on the ocean or the rolling hills-hence the name.

Metaphysical Properties for Dolomite: Dolomite is said to be good for relieving depression or sorrow.

Marble is a metamorphic rock resulting from the metamorphism of limestone. It takes less heat to metamorphose a limestone, and for this reason Marble has a more crystalline structure than other metamorphic rocks. Pure Marble is white. The characteristic swirls and veins of colored marble varieties are due to impurities present when the rock was changing: for instance clay, sand, iron oxide, etc. Iron makes marble red or pink. Chlorite makes it green. Marble is found all over the world in many different colors and patterns. Marble is highly prized for its inexhaustible supply and often used in buildings. The word "marble" comes from the Greek word marmaros, meaning "shining stone."

The belief in the magical properties of the rocks and minerals is not new. Belief in the supernatural properties of rocks and minerals bringing peace, wellness and protection goes back beyond recorded history. There are ancient legends that trace rocks, minerals and crystals back to the creation of the Earth and the Universe. Most of my metaphysical information is taken from The Book of Stones-Who They Are and What They Teach, with permission from its co-author, Mr. Robert Simmons. Metaphysically Calcite is said to alleviate emotional stress, replacing it with serenity, and enhancing trust in oneself and the ability to overcome setbacks.

OakRocks has been in the rock and mineral business for 30 years. We are a great source for Calcite, Dolomite, Aragonite and various Marbles . We carry a variety of Calcite, Aragonite and Marble stone carvings, including animals, eggs, and spheres, as well as sometimes rough rock, stone slabs, polished specimens and some cabochons. We also specialize in a material known as Wave Dolomite, or Rolling Hills Dolomite, a gorgeous banded variety from Mexico in rough rock, stone slabs, polished slabs and polished rocks.