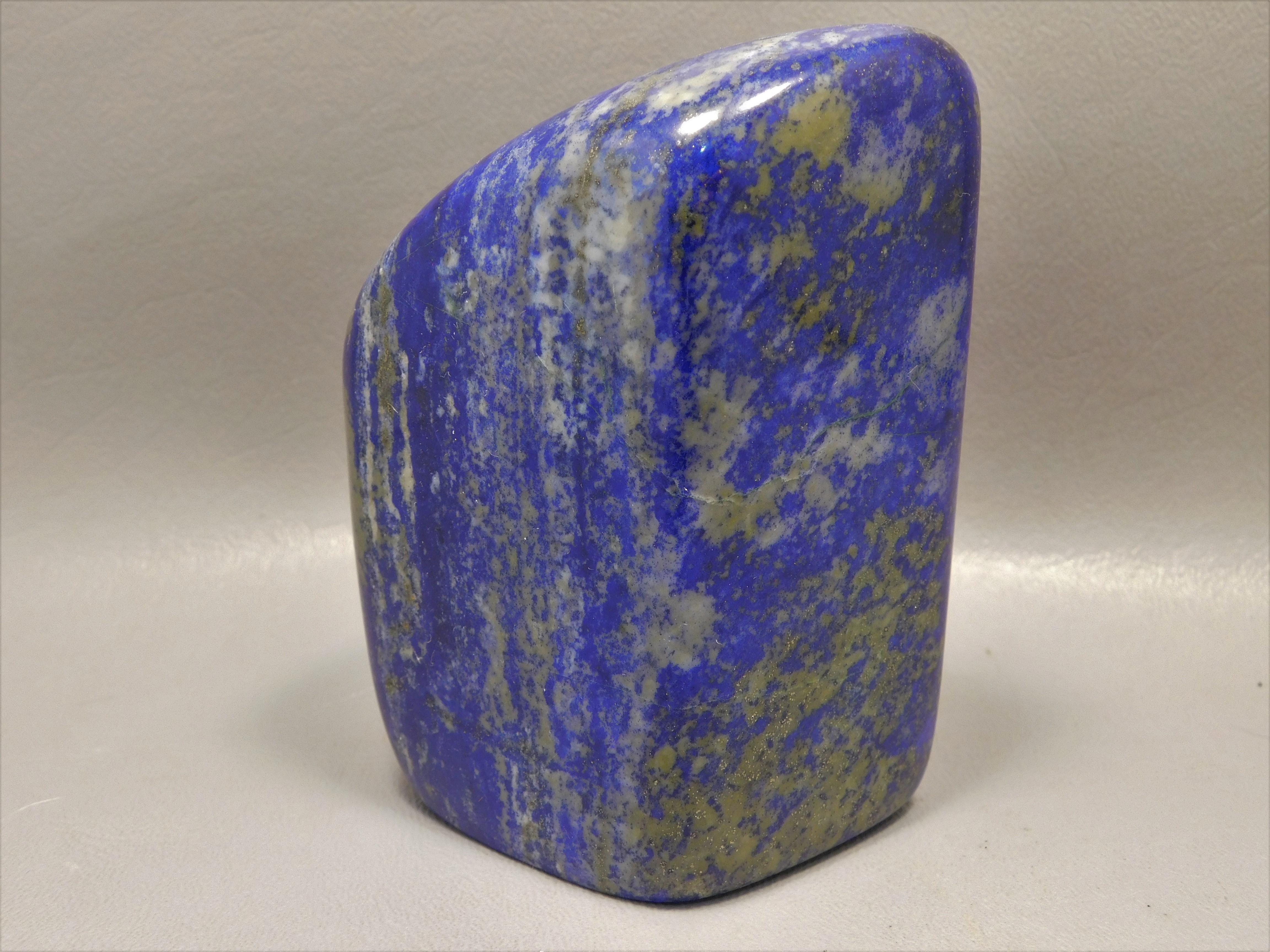 Lapis Lazuli (often just referred to as Lapis) is an opaque, bright blue stone consisting mainly of Diopside and Lazurite.

Lapis often has gold flecks (Pyrite) or whiteish veins (Calcite). The solid dark blue, or blue with gold flecks is generally the most desirable.

It's hardness is about 5.5 to 6, but since Lapis can consist of a variety of minerals, the hardness can vary. Besides Calcite and Pyrite, Lapis can contain dolomite, sodalite, diopside, mica, and other minerals too.

The name is a compound of "lapis", the Latin word for stone, and the Arabian word "azul", meaning blue.

Lapis forms in massive, is opaque, and sometimes has a granular appearance. Lapis Lazuli is often dyed.

Lapis Lazuli was created millions of years ago in the course of metamorphosis process.

The majority of Lapis comes from the West Hindu Kush mountains in the Badakhshan region of Afghanistan. The Sar-e Sang mines of Afghanistan have been around for more than 7000 years! They are believed to be the oldest and longest working mines on the planet. An Arab geographer recorded a visit to the Afghanistan Lapis mines in the 10th century. Marco Polo visited and wrote about them in 1271.

Lapis also has been found in Russia, Canada, Pakistan, Chile, Argentina and of lower quality in Chile.  Small amounts have been found in California, Colorado, and Arizona.

The ancient Egyptians used Lapis Lazuli in scarabs, beads, pendants, and other jewelry as far back as 3100 B.C. It was ground into a powder and ingested as a medicine or use to adorn the body, such as for eye shadow. It has been found in Egyptian tombs, including that of King Tut. Lapis was also a stone of royalty in ancient Sumer and was treasured in China at least 2500 years ago. Palace walls have been covered with Lapis. The Romans believed it was a powerful aphrodisiac and named in sapphirus, meaning blue.

Experts believe it was the "sapphire" mentioned in the Bible, the most highly prized blue gem of ancient times. It even was crushed into pigment and used to make blue paint in many Renaissance paintings.

Lapis Lazuli was popular with alchemist and used in both medicine and cosmetics.

Buddhist beliefs recommend Lapis as a stone to bring inner peace and freedom from negative thoughts.

Lapis is said to enhance intellectual ability, making one a better student or teacher. It is said to assist in moving past the conscious to allow one to identify habits, patterns, and lessons one is not aware of consciously.

OakRocks has been in the rock and mineral business for 30 years. We are a great source for Lapis Lazuli and carry a selection of rough, Lapis polished pieces and lovely carved Lapis Lazuli animals.