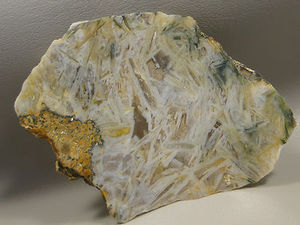 Sagenite Agate, or more accurately, Sagenitic Agate is any agate having acicular or needle like mineral or crystal growths, intersecting in a grid-like or grill-like manner.

These hair like filaments are often arranged in fans or sunbursts.

Sagenitic Agates are found all over the world in most agate deposits. Although the occurrence of sagenite inclusions in agate is usually limited.  It occurs in nodules or veins. The pseudomorph inclusions get their form mainly from needle shaped zeolites, aragonite, gypsum, goethite and antimonite.  Sometimes both sagenite and plume inclusions can occur together.

The word sagenite comes from the Greek word that means "net".

Some Sagenite Agate from Mongolia is called Chopstick Agate.

Agate is a member of the chalcedony family, or a microcrystalline quartz, and it has a hardness of about 7 on the Moh's scale.

In general Agates are said to be stabilizing and strengthening. It is believed Agate improves memory and increases energy.

OakRocks has been in the rock and mineral business for 30 years. We are a great source for Sagenitic Agate or Sagenite Agate and carry a variety of rough and polished rock.