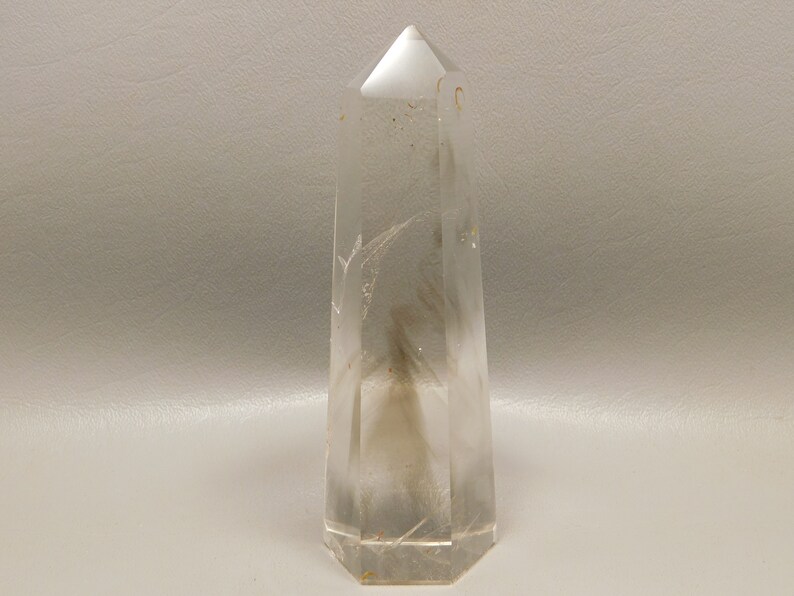 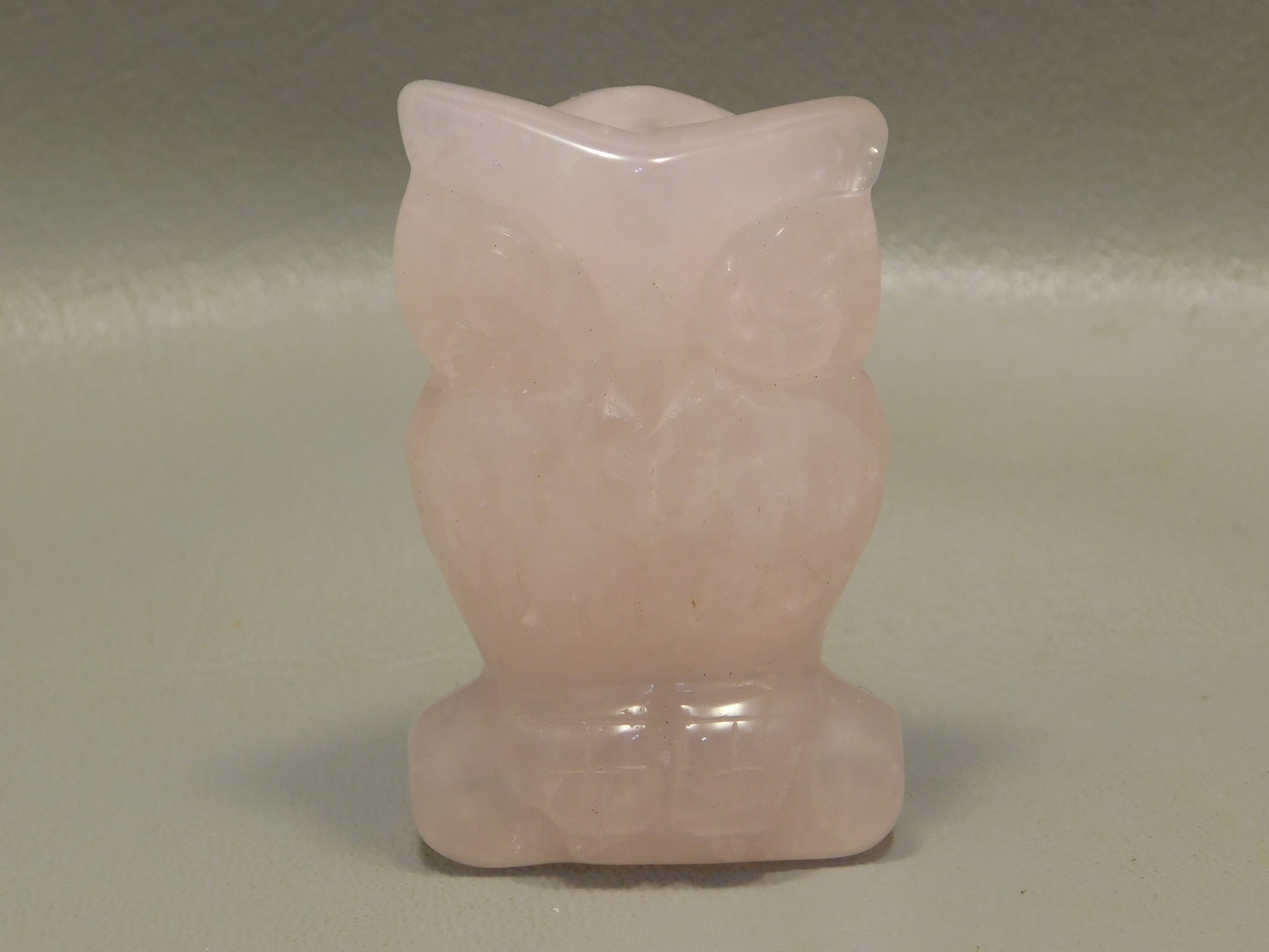 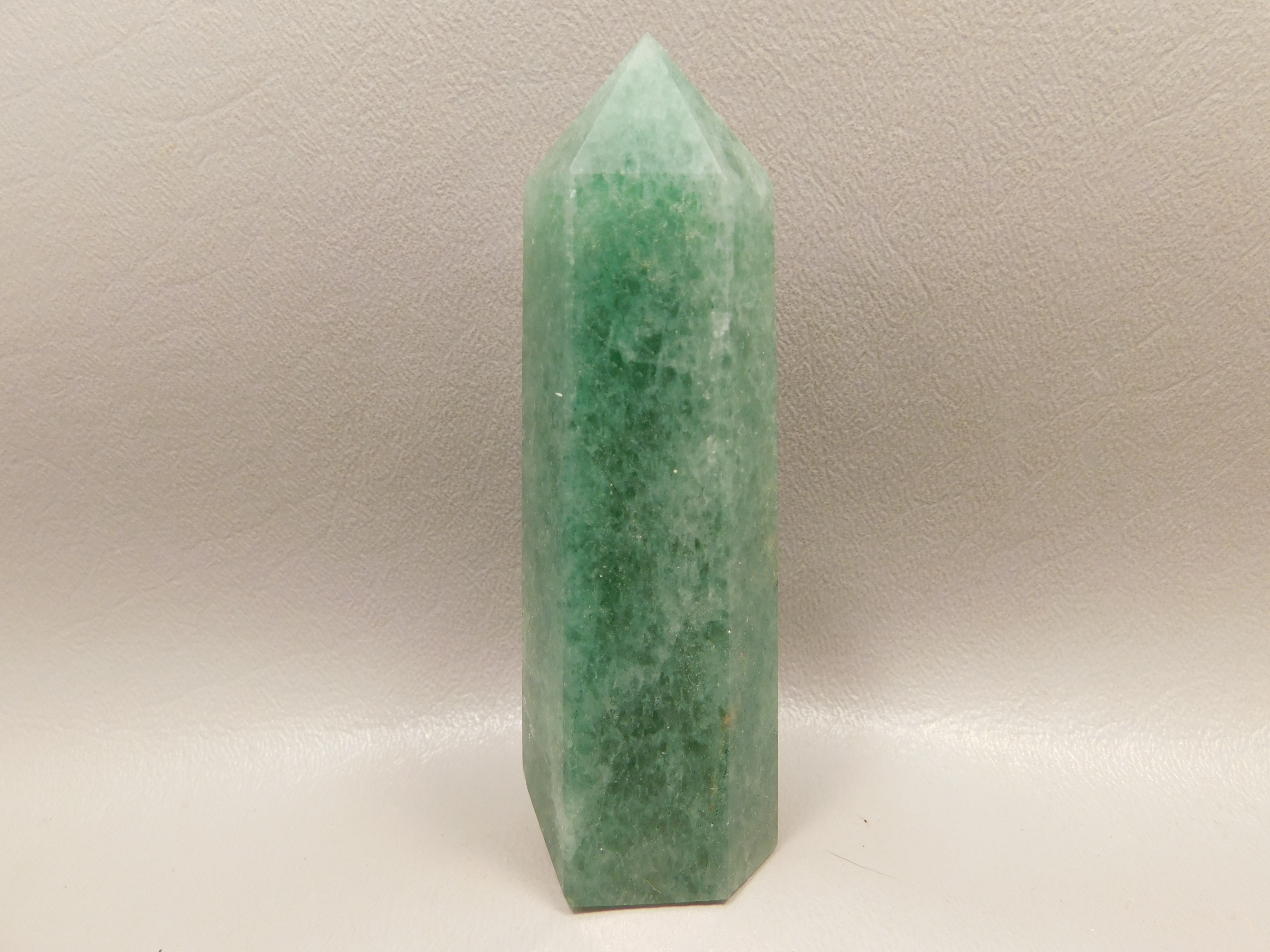 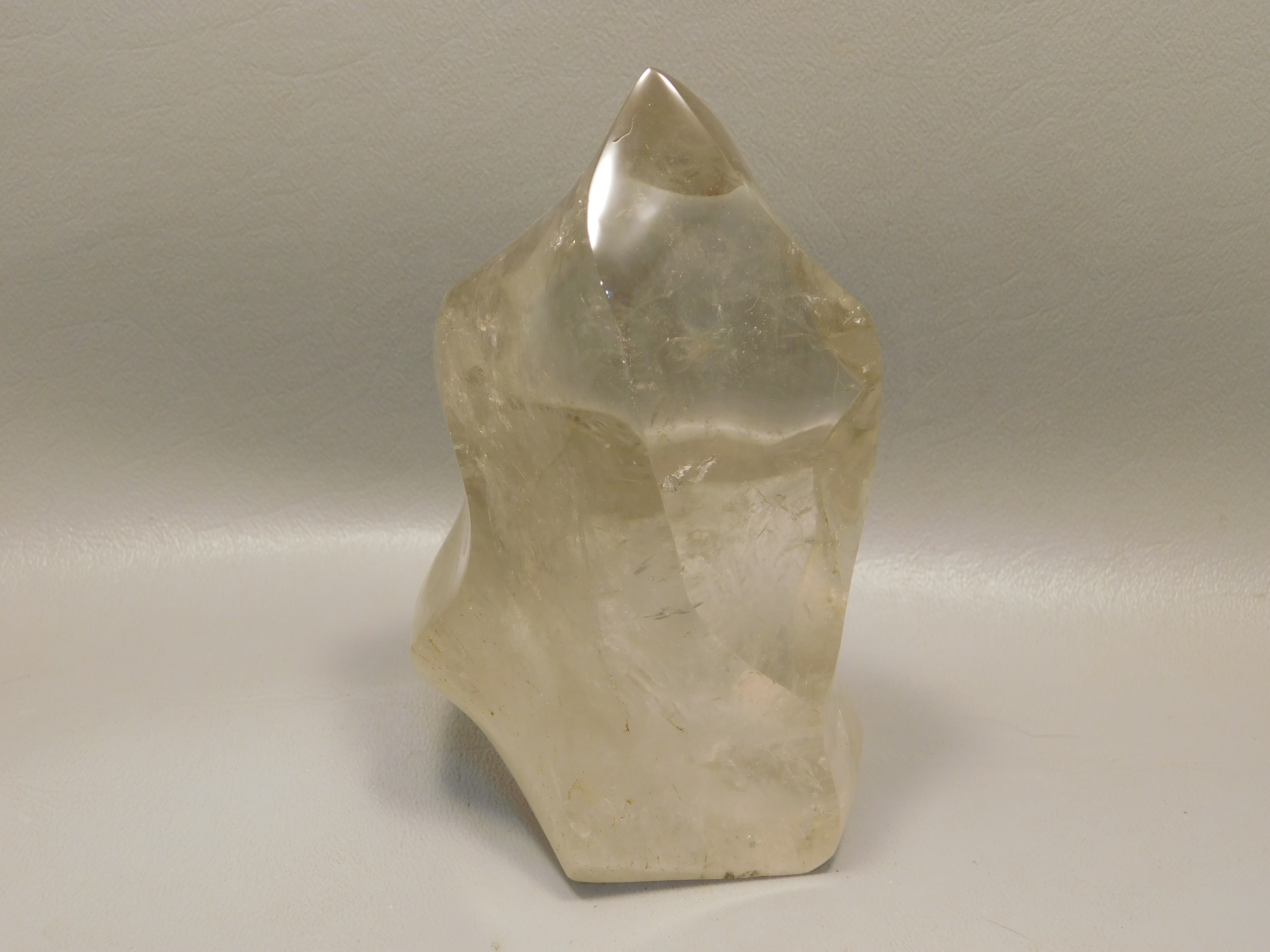 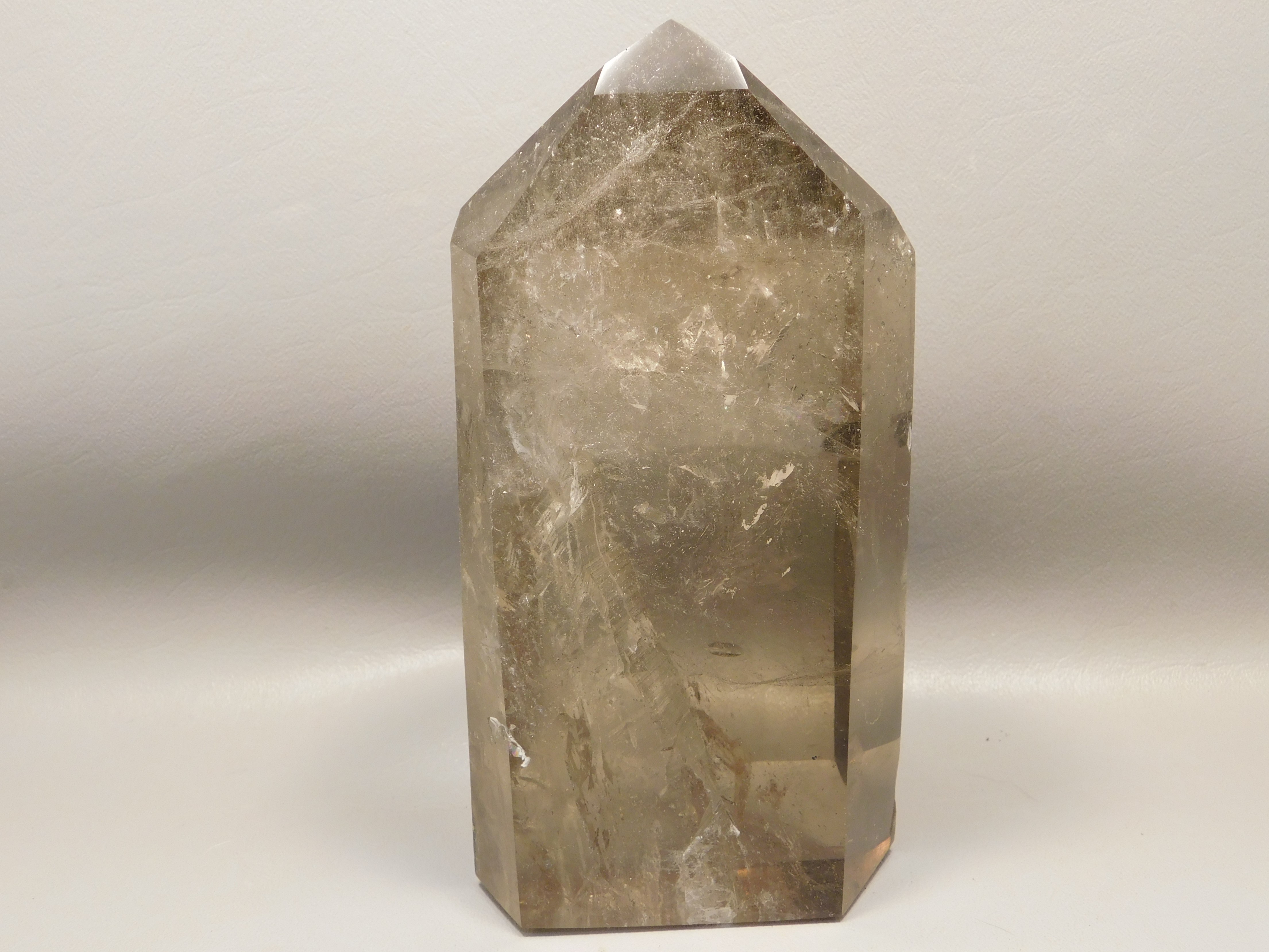 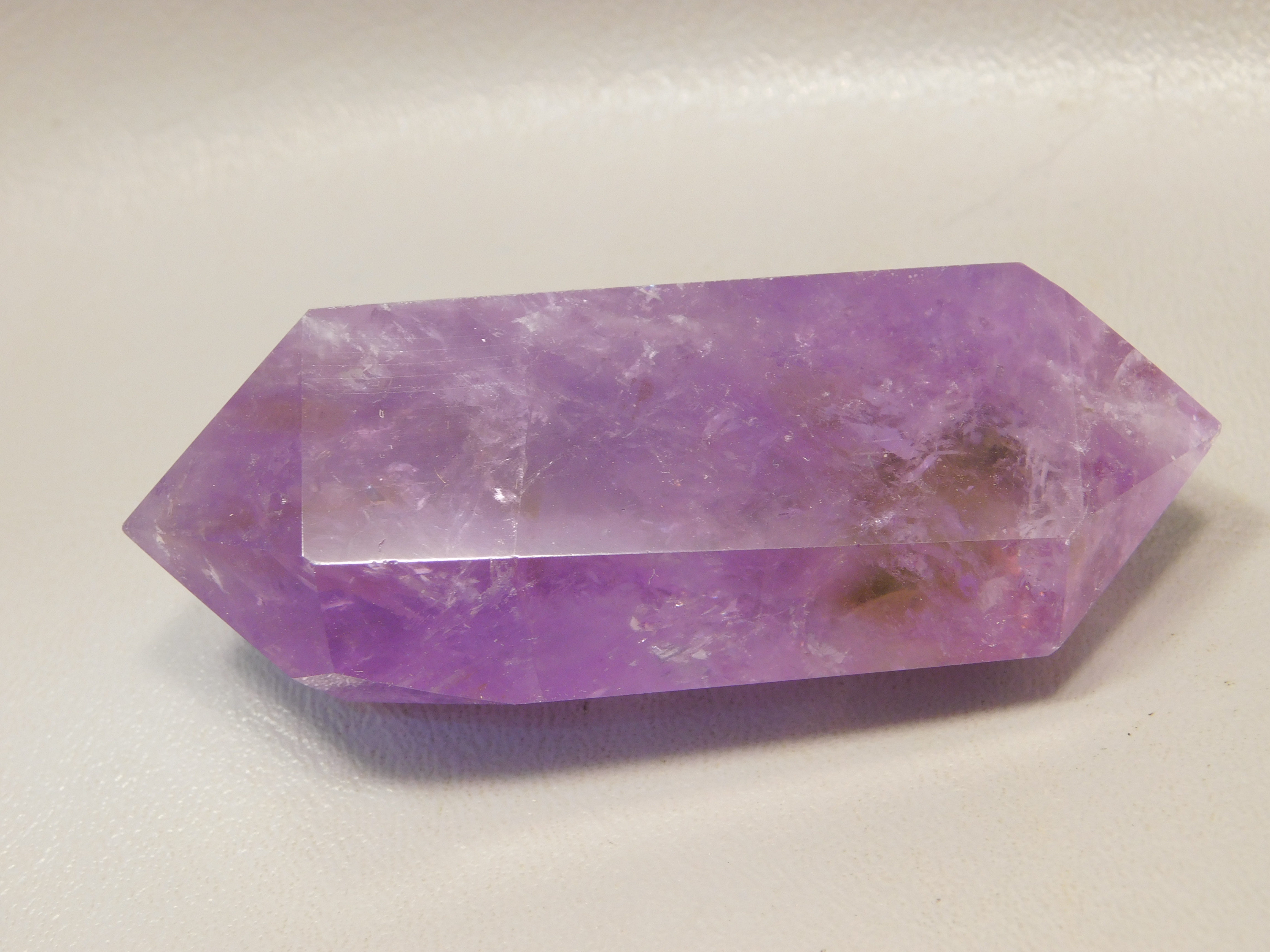 Quartz is the most common single mineral on earth.

It is found on every continent, and just about every country. Quartz has a hardness of 7, and it polished and wears well.

Macrocrystalline quartz (large crystal) includes white or milky (due to imperfections in the crystallization, such as cracks, bubbles, etc.), optically clear (referred to as Rock Crystal), Rose Quartz, Smoky Quartz, Citrine, Aventurine, and even purple - Amethyst!

The different colors are due to the presence of organic matter.

Cryptocrystalline or microcrystalline quartzes (small crystals) are called Chalcedony, and this family encompasses agates and jaspers, as well as flint, carnelian, chrysoprase and petrified wood.

Macrocrystalline Quartz occurs in many formations, both massive and crystals. Optically clear does not mean it has no inclusions. It means that the crystal is not milky or cloudy at all.

Quartz can have several phenomena including phantom crystals, or asterism (star effect). It can have water trapped inside, known as Enhydro.

Quartz has many uses. Most notably in the control of radio frequencies. Radios made during World War II had tiny slices of quartz in their tuning circuits, Quartz is also used in watches.  It is also used to carve bowls, cups, vases, etc.

Quartz has long been the subject of spiritual beliefs and folklore. Crystal balls brought back by the Crusaders where believed to possess magical powers. In fact, the name crystal comes from the Greek word krystallos, meaning "ice", as it was believed that rock crystal was eternally frozen. The name Quartz comes from the Saxon word querklufferz, meaning cross vein ore.

Rose Quartz is one of the most desirable varieties of quartz. The pink to rose red color is completely unique, unlike any other pink mineral species. The color is caused by manganese, iron and titanium impurities. Rose Quartz is abundant and occurs only in massive form and the largest supply of Rose Quartz comes from Brazil. It is usually cloudy or milky, not transparent. Mineralogists also recognize that there is "Pink Quartz" that actually has been found in crystal formation and gets its very pale pink color form aluminum and phosphorous ions.  This variety is very rare and can be quite costly.  Rose Quartz does not fade, but the pink variety will fade in sunlight.

Aventurine Named after a type of glass created accidentally in the 1700's in Venice.  This type of granular quartz is dark green with metallic iridescence caused by fuchsite (green mica) inclusions.  Rarer red and brown varieties are caused by iron-mica inclusions. It also can have iridescent red or gray glitter caused by goethite or hematite inclusions.  The glistening effect is know as aventurescence. The largest deposits are in India, Brazil and Russia.  It is sometimes marketed as Jade or Indian Jade.

Aventurine is found in India, Russia, Tanzania, Brazil and Vermont.

In Ancient Greece, Aventurine was sewn into the clothing of men going to war to help preserve their courage. It is considered lucky and is a popular gem for gamblers. Legends say Aventurine is an all purpose healer. In ancient Tibet it was used to cure nearsightedness and to improve the wearer's creativity.

Citrine is a member of the quartz family too, and its color can be a pale yellow to a rich amber to almost brown. Citrine is the most valuable variety of Quartz. Natural Citrine is rare.  Most Citrines on the market are actually heat treated Amethyst or Smoky Quartz.  Citrine is often mistaken for topaz, true topaz has a hardness of 8.  Natural Citrine has been found in Brazil, the U.S. (Colorado), Spain, Russia, France and Scotland.

Smoky Quartz is usually a dark gray to dark brown color, but can even be almost black. It has been found worldwide.

Amethyst Amethyst is the purple variety of quartz. The color comes from iron and aluminum. The name "amethyst" comes from the Greek and means "not drunken." Amethyst can occur as long prismatic crystals that have a six sided pyramid at either end or can form as druses that are crystalline crusts that only show the pointed terminations.

It is found in America, Africa, Australia, Sri Lanka, Uruguay and Siberia. But the largest quantity comes from Brazil, primarily in the mining areas of Minas Gerais, Bahia and Maraba. Amethyst is the birth stone for February. Although it must always be purple to be amethyst, it can and does have a wide range of purple shades. Purple, of course, has long been the color of royalty. This actually dates to the Roman times when generals, celebrating victories, wore a toga picta or a purple toga.

Amethyst is also mentioned in the Bible as being one of the "stones of fire" (Ezekiel 28:13-16) given to Moses and set in the breastplate of Aaron (Exodus 28:15-30). Amethyst is the third stone in the third row of the breastplate and the twelfth and last stone listed in the foundation of the New Jerusalem. Amethyst is one of the few stones in which experts agree as to the correctness of its identification. The Hebrew word for amethyst, ahlamah, literally means “dream stone,” and it was thought that it induced pleasant dreams. Beautifully carved and engraved amethyst goblets, vases, charms and miniatures have been found in excavations. Because it is believed to encourage celibacy by calming passion, Amethyst was used in decorating Catholic churches in the middle ages. Even some Popes or Bishops today still wear Amethyst rings.

Clear Quartz is said to have an incredible variety of energies and forms. It is used to structure, store, amplify, focus, transmit and transform energy, which includes thoughts, emotions and information.

Rose Quartz is the stone of unconditional love! It opens the heart to all types of love: self-love, family love, & romantic love. Rose Quartz is said to be protective during pregnancy and childbirth and to be helpful with weight loss!

Green Aventurine is a stone of optimism and zest for life. Aventurine is said to bring good luck, and prosperity. It helps you establish your independence and freedom, and promotes imagination and creativity. It can help one navigate difficult emotional experiences.

OakRocks has been in the rock and mineral business for 30 years. We are a great source for Quartz, Rose Quartz, Amethyst, Citrine Quartz, Smoky Quartz, and Aventurine:  in mineral specimens, crystals, towers, points, carvings, eggs, spheres, polished pieces, rough rock and more!