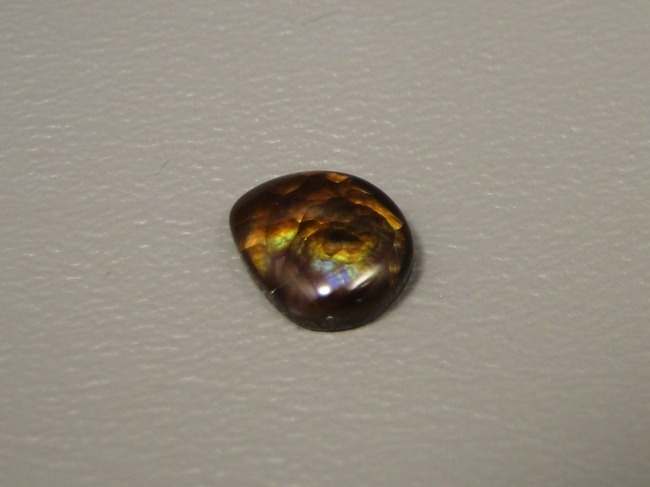 Fire Agate is a layered stone. The layers are small enough that light entering them forms interference colors known as "fire."

It is thought to be formed when hot water saturated with silica and iron oxide invaded cavities in the rock and began to cool. Chalcedony then began to grow on any available surface (the iron oxide gives the basic brown color to the gem).

As the rock grew, layers of silica and iron oxide would be deposited depending on the level of those elements in the mix and other conditions. These alternating silica and iron oxide layers (Schiller layers) cause the brilliant rainbow fire in the gemstone. As iron oxide ran out in the mix white chalcedony continued to grow, this forms the white caps on some of these stones.   The best pieces, when cut and rolled under a bright light, display bright flashes of red, orange, yellow, green, purple, and even blue.  Most Fire Agate cabochons are sculpted on top to bring out these colors.  Larger pieces are rare.

Fire Agate is found in Arizona and in Mexico. Some of the best came from Deer Creek, Arizona and from Slaughter Mountain on the San Carlos Indian Reservation. The mountain, which is the highest point in the Gila Mountains, is over 6500 feet in elevation and lies within Graham County, Arizona. Unfortunately it can only be dug there by a resident of the reservation so supplies are limited. I have dug many years ago at Deer Creek. Fire Agate is fun to dig and cut. You never know what will be revealed as you cut through the layers!

Metaphysical Properties: Fire Agate is said to awaken ones senses, and increases the pleasure one takes in life. It can help banish feelings of resignation or helplessness.

OakRocks has been in the rock and mineral business for 30 years. We carry a selection of Fire Agate cabochons.