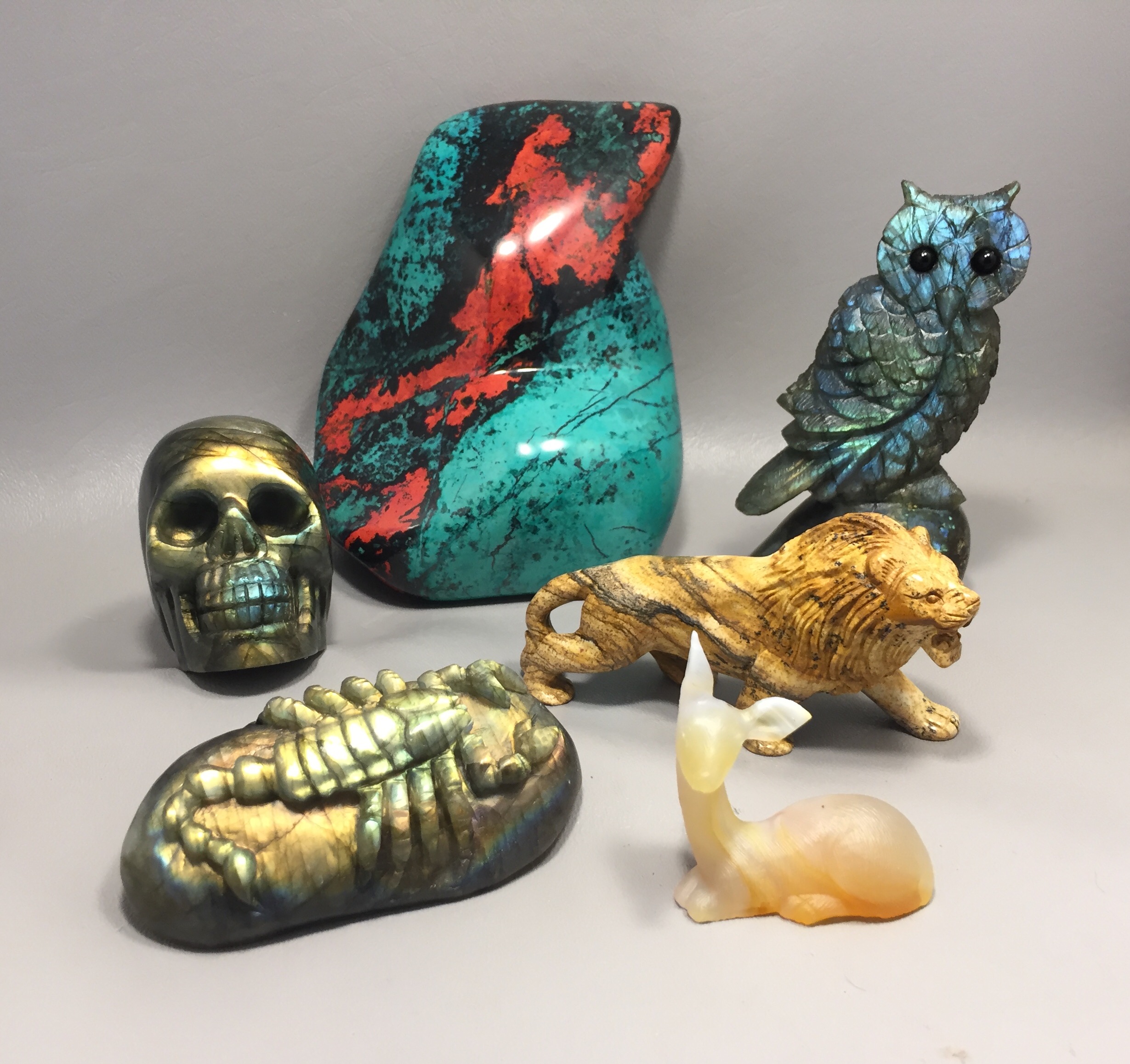 What is my spirit animal?

Early people honored animals for their strength and character, and the animal was recognized as a symbol for these traits. Myths gave special meaning or extraordinary qualities to common animals.  Almost all ancient cultures carved animal figurines from stones.

In ancient Egypt it was thought that some gods and goddesses represented themselves on earth in the form of an animal, and honoring that animal would please the god or goddess. The animal that was believed to be the incarnation of the god or goddess lived a pampered life. Gemstone animal carvings were often put in toms to guide or protect the person in the afterlife.

West Africans believe that each person has a magical or spiritual connection to a particular animal that can act as a guardian, a source of wisdom, or an inspiration.

In most Native American beliefs, man communicated with the Creator through interaction with animals.

Some tribes, most notably the Zuni, carve gemstone animal fetishes that represent the spirit of that animal and are believed to invoke the wisdom and protection of that animal for the owner.

Please keep in mind that animal symbolism and fetish meanings vary greatly between cultures, and even tribes, and that this list is simply a compilation of information and is offered just for fun!

Bear   is the symbol of maternal protection, as well as strength, courage, power and honor. A bear fetish is believed to lighten emotional burdens. Many civilizations have myths regarding bears, from the Greeks and the Celts to the Ainu of northern Japan and the tribes of North America.

Bird  is enlightenment, perspective, swiftness, vision, and knowledge of the future. Every U.S. state has an official bird, as do all of Canada’s provinces, Australia’s states and Japan’s prefectures.

Buffalo  is abundance, having your survival needs met, good fortune, and healing. The buffalo gives you the endurance to overcome and great emotional courage. The bison is also depicted on the flags of Wyoming, Kansas, and Manitoba, the state seals of Kansas and Indiana, and on Manitoba’s coat-of-arms. The White Buffalo is very rare and it is a sign of peaceful times ahead.

Cat  is feminine energy, agility in body and spirit, and is believed to keep the wearer safe in travel. This animal is resourceful, strong and fearless. Use a cat figure to increase courage and confidence. In ancient Egypt the cat was an object of worship. In Ancient Greece and Rome, the cat was attributed to the goddess of liberty, and it was sacred to the goddess of the moon. A cat saved Mohammed from the serpent, and it is thus revered in Muslim cultures.

Dog  of course, is companionship, and also health, service, loyalty, protection, guidance, fidelity, faithfulness, and watchfulness. In the Chinese zodiac, people born in the year of the dog are regarded as faithful and true.

Dolphin  represents joy, childlike play, helpfulness, and harmony. The Dolphin can teach us much about harmony with others, and are therefore a great symbol for friendship. Dolphins can take away tensions and help bring joy to your life. For the Greeks, Dolphins represented the sacred and righteous.

Duck  teaches you how to maneuver through the waters of life with grace. Ducks are also a Celtic animal symbol of honesty, simplicity and resourcefulness.

Elephant  is commitment, strength, and power. The elephant attains old age and with it, wisdom and long memory. The Elephant is considered a strong symbol of luck in Thailand. The Hindu god of wisdom and success, Ganesha, is usually depicted with an elephant's head. The elephant has been a symbol of the Republican Party of the United States ever since 1874.

Fish  is miracles, good luck, prosperity, foresight, and fortune. The fish can be a helper at times of movement and change, in both financial and spiritual situations. Throughout history fish have been associated with religion and worship. Fish were considered sacred to the Greeks and Romans. The first Christians represented trinity by three fishes. The Fish is also one of the eight sacred symbols of the Buddha.

Frog  represents healing, cleansing, health, and honesty. In myths they are bringers of rain or thunder, calling the water down with their croaking. In Ancient China toads were a symbol of longevity, and they were associated with Liu Hai, the God of wealth. In Rome, the frog was believed to bring good luck to the home.

Giraffe  has its legs firmly planted on the earth, but its head in the sky. This represents balance and the ability to progress, as well as the ability to reach things that are unreachable to others.

Hedgehog  symbolizes self-preservation, and defensiveness. The Hedgehog teaches how to be on the defense and how to protect yourself.

Hippopotamus  is associated with birth, motherhood and the protection of the young. Tauret was a goddess of childbirth, nurturing and protection. She was depicted as a pregnant hippopotamus. The hippo can teach you how to move through the emotional waters and keep in touch with your intuition, while remaining grounded, practical and stable. The hippopotamus is sacred in Egyptian and African traditions. Its name means "Water Horse," and it spends most of its day in water.

Horse  is power, stamina, speed, wisdom, nobility, energy, wildness, strength and power, coping under difficult circumstances, devotion, loyalty, and communication. The state animal of New Jersey is the horse. Since man has relied on the horse for so long, it has become a symbol of friendship, travel, transportation, mobility, and freedom. Shamans are often pictured flying on mythical horses.

Kangaroo  In shamanism it is said that the kangaroo, with its enormous leaping ability, can teach us how to jump over obstacles, like beliefs or fears that prevent you from doing what you really want. The Kangaroo only moves forward, never backward.

Lion  inspires strength, courage, pride, nobility, and fairness. Because of the lion's noble character, it represents the great power of self-control. The Egyptians saw the lion as a symbol of power and wealth. In Singapore, a lion and tiger are depicted on the coat of arms of “the city of lions.” The lion is a traditional symbol of Spain and of Great Britain.

Lizard  represents foresight, vision, dreaming, letting go, and facing fears and confrontations. One of the few reptiles recognized as helpful to the shaman.

Octopus symbolizes intelligence, moving rapidly away from danger when needed, and the proper use of smoke screens (ink) in evading enemies. The Octopus shows us how to get what we want in an intelligent and efficient way.

Owl  is a symbol of wisdom and often considered magical. In Greek mythology, the owl was sacred to Athena, the goddess of wisdom. The owl has exceptional vision and sense of hearing and is regarded as the protector of the night.

Pig  The Greek earth fertility goddess, Demeter, kept a sacred pig, which became a symbol of fertility. The pig is also a strong symbol of luck. If you need more luck in financial matters, the pig provides prosperity in abundance. Native American Indians recognize the pig as a symbol of the abundance of daily life, and believe that it teaches us to celebrate life and share it with others.

Rabbit  is a symbol of fertility, swiftness, longevity, courage, vigilance, and quick thinking. Rabbits in mythology are often associated with the great cycle of life and death. Rabbit teaches to be caring and loyal to family members, and to be kind to others. The rabbit was one of the favorite animals of the Greek goddess of love, Aphrodite. The Rabbit is a symbol of faith for several religions.

Rhinoceros is a symbol for confidence, assurance, steadiness, and sure-footedness.

Rooster  is courageous. An image of a Rooster conveys a wish for advancement, because the Rooster's crest, (guan), is a play on the Chinese word meaning official. More importantly, the Rooster is can ward off evil spirits.

Squirrel  represents gathering, foresight, energy, storing, warning, balance and harmony, and thrift. Squirrel is a wonderful symbol for people who need to get organized. They also warn you to be careful of useless hoarding and teach you to take life lightly.

Tiger  is courage, fierceness, and strength. In shamanism, tigers are associated with power, ferocity, passion and sensuality. In China, tiger images are used as charms to ward off evil. A symbol of protection, the image of a tiger is often seen on clothing or in the home to ward off harm. In certain areas of Asia, the Tiger is regarded as the God of Wealth. Tsai Shen Yeh, the Chinese God of Wealth is depicted sitting on a tiger.

Turtle  live to a very old age and so are often associated with long life. We can learn much about time and the perception of time by listening to the turtle. In most Native American cultures the turtle is the symbol of Mother Earth.

Wolf  most cultures have stories of a great Wolf. The Wolf is a symbol of family, unity and spirituality. Wolves have been long regarded by Native Americans as teachers or pathfinders.

Be sure and check out our List of Rocks and Minerals for more information on specific rocks!