Nevada is a great place for rocks and minerals. 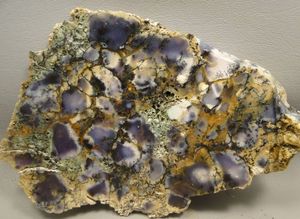 Nevada is the seventh largest state in the union. Yet it's population density is very low. So much of the state is still open and uncrowded lands. There are nearly 50 million acres of BLM land to explore.

At one time most of Nevada was underwater. Then ice from the ice age covered much of the land. But the state slowly dried out and in fact Nevada is now the driest state. All these changes created not only many fossils, but gold, silver, and many other minerals. Since Nevada was a huge mining state, there now are lots of tailings piles and mine dumps to search through.

The gold rush spilled into Nevada. Hundreds of men combed the interior of Nevada in the early 1860s, where they established mines and camps such as Table Mountain, Austin, Ophir, Jefferson, Silver Peak, and Cortez. By 1879, Nevada could claim 149 mining districts, each with one or more camps. Today Nevada is the third largest gold producer in the world . Silver mining in Nevada began in 1858 with the discovery of the Comstock Lode, the first major silver-mining district in the United States. Nevada calls itself the "Silver State", and Silver is the state mineral. In 2006, Nevada was the nation's second-largest producer of silver, after Alaska.

There are over 150 mining claims staked in the world famous Virgin Valley, along the border of Nevada and Oregon. Black fire opal is the state gemstone. The first discovery of precious opal in the Virgin Valley area was in 1905 or 1906. Since then a significant quantity of the highly prized opal has been recovered. Virgin Valley opal is comparable to any in the world for its vivid play of color and in terms of the size of material available. Individual pieces weighing over 3 kilograms have been recovered from the Virgin Valley deposits. In 1993, miners found a 100-kilogram opalized log containing precious opal. The material varies in body color from deep pure black to brown to yellowish-white to white to colorless. The play of color includes all colors common to precious opal, red, blue, green, yellow, orange, etc. The opal occurs primarily as replacement of wood, or sometimes, as replacement of conifer cones. Some opal does occur as nodules filling void spaces in clay. The wood replacement is so complete, that generally the wood grain and banding are no longer visible. The exception to this would be that often the exterior wood texture is still present as a brown or black rind. There are some Fee Dig spots for opal in Nevada. Check out www.nevadaopal.com/season.html, or http://www.royalpeacock.com/fee-digging.

Other rocks and minerals that have been found in Nevada include variscite, agates, jaspers, obsidian, petrified wood, azurite-malachite, selenite, cinnabar, and calcite.

Nevada has been a major producer of Turquoise, since the 1930's, and until the early 1980's, the State was the largest producer in the United States. It is estimated that over the years, 75 to 100 different mines/prospects produced sizable quantities of turquoise. Production varied from a few thousand dollars worth of material at some of the properties to more than a million dollars at others. To date, total production of rough turquoise is estimated to be in the range of $40.00 EU €31.10 to $50.00 EU €38.87 million. Turquoise from Nevada comes in various shades of blue, blue-green, green-blue, and green. Some of the turquoise may contain iron, if it does, its color is pale green to yellow-green to yellow. The material can be solid colored or spiderwebbed with either brown or black webbing; the spiderwebbing may occur in any of the different colors or shades. Some of the blue material is represented as the finest pure-blue turquoise produced. It can occur in thin veins or seams or as nodules, with single nodules reported as large as 150 pounds. The quality varies from hard solid material that takes a good polish, to soft porous material that can only be use as feed stock for treatment, enhancement, or stabilization processes.